Disclosure: This post may contain affiliate links. This means, we may receive a small commission if you choose to purchase something from a link we post (including links to amazon.com because we are a participant in the Amazon Services LLC Associates Program.) Don’t worry, it won’t cost you anything.
Share
Pin
Tweet
Email
0 Shares

After posting such a practical kids gift idea last week, I decided to post the gifts that my boys asked for the most and were the most excited to receive. 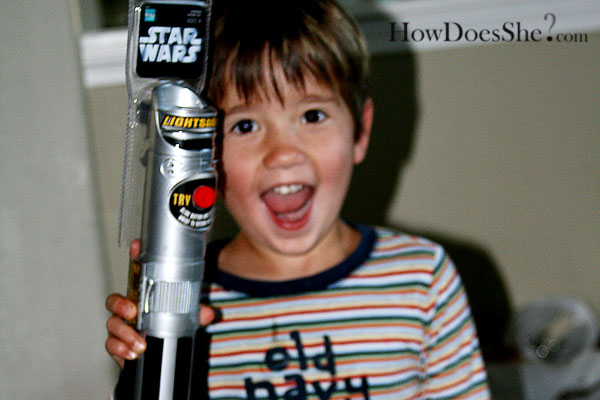 For my 6 year old – a sword.  Every birthday and Christmas for the past three years, his #1 idea has been the same…a sword.  The theme of the sword has changed, (Star Wars (every color), Kung Fu Panda, Power Rangers and pirate) but still a sword.

My 8 year old – remote controlled helicopter.  He received one of these two years ago and after about 2 weeks of some heavy flying time and many patches, it finally broke.  So the next year it was top on his list again.  This one lasted a little longer, but not much.  You might think, what a waste of money – but I see it as a toy that entertained for many hours and then saw itself to the trash instead of me finding it under his bed three years later and trashing it.  It is seriously FUN to fly and even after going through two of them, I would buy another one.  I am sure that older kids would have better luck with them as my boys were crashing them constantly – which is why they broke.

What toys are top on your kid’s lists?

Although Alison, Missy & Shelley started HowDoesShe in 2009, the real backbone of HowDoesShe is its many talented female writers and contributors from all over the United States and Canada, sharing both personal and professional articles and tutorials on how to be amazing women. Read more...
0 Shares
Share
Pin
Tweet
Email