Disclosure: This post may contain affiliate links. This means, we may receive a small commission if you choose to purchase something from a link we post (including links to amazon.com because we are a participant in the Amazon Services LLC Associates Program.) Don’t worry, it won’t cost you anything.
Share161
Pin42
Tweet
Email
203 Shares

As I prepare for summer this year, (we are still in school over here) I am thinking about what has worked in the past (and what hasn’t) to keep our kids happy, healthy, and entertained – with as little screen time as possible – during our weeks spent at home all together.

In previous years, I’ve made check-lists of things for my kids to do each morning. The items on the list would include things like *Straighten Room and *Summer Workbooks for 20 Minutes. As I considered doing another similar list this year, I saw it through different eyes.

In the past, I was asking my kids to get through a few “chores”, usually so they could earn “Screen Time” which would include TV or Wii or games on the iPad.

Sometimes, one of the items needing to be checked off, was *Play Outside.

However, over the course of the last school year, we’ve been trying to make some changes as a family. Through lots of family counsels and discussions, and trying different things, we’ve been working on decreasing our dependence on screen time to keep us constantly entertained.

Here are some examples:

If my boys wake up at 7 a.m.-ish and go to bed at 8 p.m.-ish,  (bedtime always gets later and later as the weeks go by) that means I’m looking at, at the very least, a 13 hour day. Take out that 2.5 hours for chores, and another hour for eating lunch and dinner and we are at 3.5 hours.

If we subtract that from a 13 hour day, it means I am asking (sometimes begging) my kids to play outside for (usually) under an hour {and basically framing it as a “chore” that needs to be gotten out of the way} and allowing for NINE AND A HALF HOURS OF SCREEN TIME!!!!!

Does this sound right?

Okay, maybe my math is off. Maybe this isn’t realistic.

We still do play dates and beach days and a week vacation to see family. But if I’m being perfectly honest, my way of coping with having five boys all together under one roof, all day every day, for weeks on end, has been to let screens do a lot of the heavy lifting. I’ve even discovered that if I sequester different boys in different rooms with different electronics, I can potentially have multiple minutes in a row of peace and quiet! (As long as all electronics are functioning correctly!) My husband and I have now resorted to this tactic multiple times including pretty much every single time we leave for date night (just to spare the poor babysitter.)

I remember when I was growing up, my mom was usually around. And when she was around, we were outside playing to avoid doing things like practicing piano. During the summer we drank from the hose and came in at dinner time; usually going back outside AFTER dinner for some Kick-The-Can in our cul-de-sac.

However, the days she was grocery shopping or running errands or doing whatever nebulous things moms needed to do in the 80’s, my older sister and I were more than happy to spend the entire day in front of the TV. We didn’t have cable so that meant very limited programming options, very few kid shows (and only during certain hours) with mostly just a lot of lame shows to choose from. Commercials provided breaks to run into the kitchen for snacks and boring shows provided, well, boredom. Our TV was TINY by todays standards, but we still sat all the way across the room from it. (Assuming the remote was working. If not, we were two inches away.)

Now, my kids can spend hours staring at a screen, be totally entertained the whole time, and never have to lift their eyes for a single second. (Which, as an aside, is increasing eye strain and vision related problems in kids.)

Now, like my mom, I have five kids. I’m usually around. My oldest was not allowed to watch t.v. until he was about 3 years old. My youngest…slightly different story.

A few years ago I got in the habit of handing the iPad to toddler Lincoln (the baby of the family) whenever I needed to hop in the shower, or do the laundry, or start dinner. I reasoned that watching Baby Einsteins on the iPad wasn’t any different than watching it on the TV. And one way or another I needed to keep that kid from wrecking havoc the moment my back was turned. However, I noticed that when I handed the iPad to him–with a cute little show all ready to go–he wouldn’t watch it! He would flip from show to show to show. Only pausing for a few minutes or seconds and then moving on. Simply because he could.

Yes, as a kid we flipped through channels, but when you found the one and only cartoon or “kid” show on right then, you usually stuck with it no matter how lame. (I’m looking at you “Tale Spin”.) It occurred to me, that in a family full of little boys already prone to ADHD, consuming endless cartoons in tiny snippets was probably not great for his tiny, developing brain.

So after the iPads snuck in and took over the family, I started trying to fight back by forcing “outside time”… to earn more iPad time. Over the years I’ve noticed that when I say “Play outside for X amount of time and you can watch a show.” The “play” becomes TORTURE!!!

“I need to go to the bathroom!”

“There’s nothing to do!”

The minute I put ‘outside play’ as something to get through to get to screen time, it becomes a chore. Just something they need to get out of the way so they can get back to Phineas and Ferb.

When did “Go jump on the trampoline!” become a chore? When did it become something I had to REQUIRE that my kids do for a certain (usually small) amount of time to earn the thing they REALLY want to do: Play Fortnight?

As is usually the case with me, I do not have a perfect solution, but I’ll tell you what I think is helping our family address the problem of screen addiction.

I do know that when TV is not an option–at all–the kids usually find a way to entertain themselves. Yes, of course there is whining and boredom, but they are getting better at it especially when there are clear and set limits. I’ve found them playing cards, I’ve found them building forts, and I’ve found them riding bikes. And the other day they built a cardboard robot costume and took turns wearing it. But, I usually ONLY see these things when the TV isn’t on to distract them.

I also know that since I’ve stopped using the DVD player in the car, my four-year-old, Lincoln, who at first needed my constant commentary to distract him from not watching a show, is now looking out the window and commenting on flowers and trees and clouds on his own. Yesterday he said “Mom! Look at the pretty orange flowers!” When he spoke, I realized he’d been quiet for a long time. Not because a show was on, but because he was looking out the window.

And I’ve noticed that since taking all the games off my phone and the iPads, the kids aren’t constantly begging for them, or even more annoying, trying to steal them the moment they see the lock screen is off.

My 8-year-old used to ask to play on the iPad multiple times daily. He never even mentions it anymore. My 11-year-old now takes pride in how much he plays outside. One Friday (when TV was an option) he told me “I didn’t watch TV or play a video game all day today Mom!”

We’re making slow progress over here. It’s not always easy. (Fine, it’s never easy to make massive painful changes.) But I think we are starting to turn a corner. My 11-year-old is doing more reading and my 8-year-old is actually finding things to entertain him in the backyard. My 13-year-old leaves his ‘dumb’ phone at home most days, and the 16-year-old…well, he is still 16. But the 4-year-old is actually showing more interest in Legos and I occasionally find him playing with toys not just dumping them out on the floor and ignoring them.

Technology is not the boss of me.

Technology will not control all of our lives.

Technology will not be the thing most valued by my kids.

I want to bring a whole day playing in the backyard and making mud pies back.

I want to bring neighborhood bike rides back.

I want to bring night games back.

I want to bring childhood back!

I think I can do it for my kids.

7 Simple, Magical Ways This Smart Mom Entertains Her Kids Inside 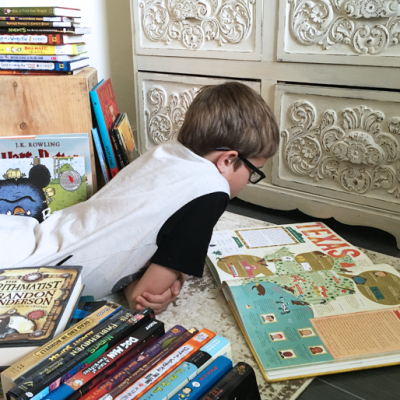 Previous Post: « Shut Up Parenting – Knowing When “Nothing” is the Right Thing to Say
Next Post: Visit San Fran! The Best Things To Do in San Francisco »