Disclosure: This post may contain affiliate links. This means, we may receive a small commission if you choose to purchase something from a link we post (including links to amazon.com because we are a participant in the Amazon Services LLC Associates Program.) Don’t worry, it won’t cost you anything.
Share377
Pin2K
Tweet
Email
2K Shares

Are you on the hunt for books like Harry Potter? Do your kids clamor for magical, fantasy stories full of imagination? Listed below are 17 fantasy books for kids who loved Harry Potter, broken down by grade-level. However, you know your kids better than I do when it comes to their reading level {As Captain Barbossa might say, these grade-levels are more of guidelines, not rules!}. 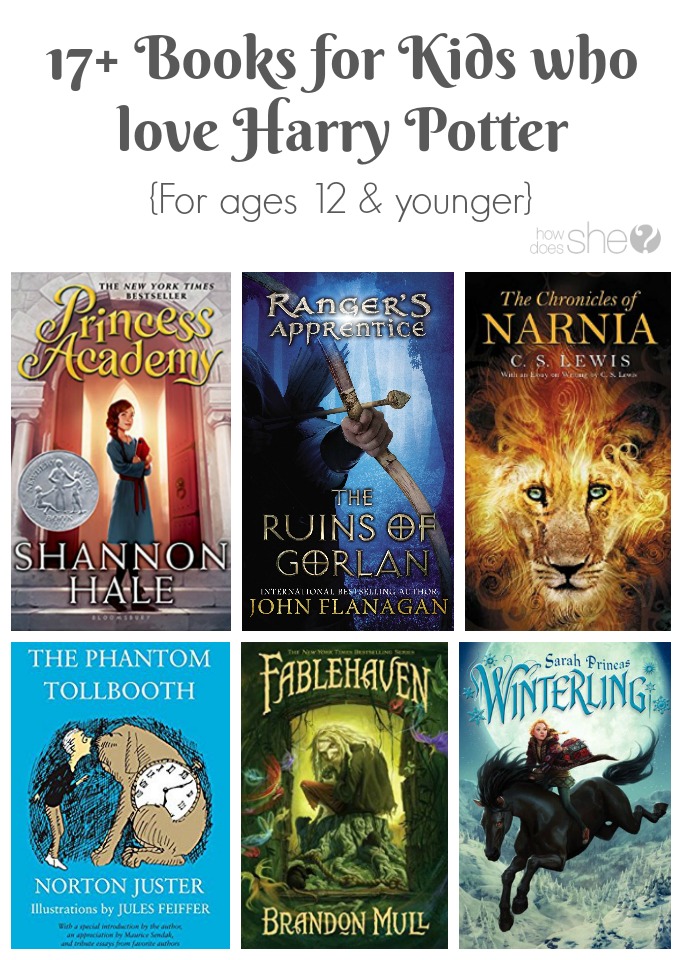 #1: How to Train your Dragon

This series is a favorite because of the humor and the immersive world of Berk. The books are super, super different from the movies and they’re great early readers. The How to Train Your Dragon series is slightly more difficult to read when compared to Diary of a Wimpy Kid.

#2: Everything by Roald Dahl

Dahl is the master of all-in-one immersive magical stories. He has an uncanny ability to draw in even the youngest readers. I love so many of his stories, but here are my kids recommendations:  The Twits, Esio Trot  and James and the Giant Peach.

Winterling is the first book in the trilogy. This beautiful story is a little Narnia-esque. I especially like the complex side characters. Kids will want to like them, but will not be able to trust them. It creates great tension (without being too scary). Plus, the paperback is a steal at $3 right now!

#4: Odd and the Frost Giants

I completely fell in love with Odd, the protagonist, and the Norse mythological setting. Plus, my kids liked the {gorgeous-gorgeous} sketches sprinkled throughout the story.

This series of 4 books (plus a pre-quel) has a rich, creative, magical setting: mysterious hills, enchanted forests and massive walls that encircle each city. This is a great series for kids who want a book like Harry Potter with a full fantasy world to explore.

Wild Born is the first of six books in Spirit Animals. A sequel series also recently hit the market. For this series, Scholastic went all out, bringing in a best selling author for each book and creating a multi-media platform. This is a fantasy adventure quest with four young heroes/heroines. This is one of the series’ I read out loud to my kids at night (my boys are in 2nd, 4th and 6th grade).

This story, written in 1988, is already considered a classic. This inventive and creative all-in-one story is perfect for reluctant readers. Also, I’ve found that this book is a great fit for kids who love Roald Dahl.

One can’t use the words “middle grade fantasy” without including Narnia. Nuff said.

This Newbery Honor book is the first of two books in the series, although the first one works well as a stand-alone (aka: not a major cliff hanger at the end). There is also a bonus novel, The Forgotten Sisters written in this same world. This book has just a subtle hint of magic woven into the story. It is primarily a coming of age tale with a welcome twist on the “princess” stories we often read.

Magyk is the first book of this 8 book series. This book is like Harry Potter in that it has ghosts, wizards, witches, spells and many of the wonderful things that HP also used. This book is thick, but I didn’t find it quite as dark or as layered as Harry Potter. Kids like the mystery {insider info: babies are swapped at birth} and the magical world of this series.

The Fablehaven series includes 5 books. There is also a sequel series Dragonwatch that just hit bookshelves, as well as a fun activity book called Book of Imagination. Because Fablehaven has a great world, a boy and a girl protagonist, and the battle of good against evil on an epic scale, it’s my #1 recommendation in this age group for books like Harry Potter. This series is considered a “must read” among fantasy fans of all ages. Book shelf space is always limited, but I have this entire series. In hardback. I’m a fan.

This is a spin on the Brother’s Grimm, so of course you’ll see a lot of the classic fairy tale characters. This is about two sisters (of course) who are orphaned and sent to live with their {very} strange grandmother. I loved the twist at the end!

Jinx is the first book in a series of three. I liked how many of the characters in this story were both good and bad — it was hard to know who to trust. And the antagonist isn’t a flimsy-bad-guy… he had some depth and was formidable. There are witches and the like in this series, but also a lot of other fable-ish characters, creatures and magical fun. I can’t believe you can score a paperback copy for around $3!

This #1 NYT bestselling series is probably one you already know. It’s a contemporary spin on Greek Gods, asking the question of “what if Greek Gods existed and had children on Earth today”.

The False Prince is the first of three books in the series. The rate of revelation in this story is spot on; I had to re-read it because I was so impressed. The author did an awesome job with the twist! But, don’t spoil it for your kiddo by getting them the second book before they finish the first! Even a little peek at book #2 will ruin the surprise, so keep it under wraps.

The Ruins of Gorlan is the first book of 12 in the The Ranger’s Apprentice. This is such a great series, I even know lots of dads who read it! It smacks of Tolkien with the the antagonist, the exiled Morgarath, Lord of the Mountains of Rain and Night. This story appeals to boy readers with a main character who survives in the forest, and is trained in surveillance and in battle.

This is the first book in the series of 4 by this super-power author team: Holly Black and Cassandra Clare. I’ve only read the first book in this series and I can see how the authors are laying the groundwork for an epic twist ahead. The villains are truly wicked and the stakes are high. I’d recommend this for 5th grade and older kids.

I have to admit, there are many more books like Harry Potter that I wanted to include, but I didn’t want the list to go on and on for days. If there is a book you think I should have included, please share it in the comments!

Disclosure: This post contains affiliate links. This means, we may receive a small commission if you choose to purchase something from a link we post. Don’t worry, it won’t cost you anything. This small percentage just helps us keep the power on and the Diet Coke stocked. We appreciate your support!

More Books and Activities for Kids:

Do you have kids in elementary school? If so, you’re likely on the lookout for non-digital activities to keep kids busy this summer.

Try out our five food treats inspired by Harry Potter! From chocolate crickets to golden snitch donuts, these are simple, adorable and yummy!