Disclosure: This post may contain affiliate links. This means, we may receive a small commission if you choose to purchase something from a link we post (including links to amazon.com because we are a participant in the Amazon Services LLC Associates Program.) Don’t worry, it won’t cost you anything.
Share120
Pin1K
Tweet
Email
1K Shares

Are you looking for books like Harry Potter for your teenager? You’re not alone! It’s been 20 years since Harry Potter first hit the shelves, and the popularity is still going strong. Many kids read Harry Potter years ago. And while they still love it, they’re now teenagers and looking for other fantasy books to read. We’ve come up with several books that might fit the bill! In this article, we’ve split up our fantasy books into several different categories, by maturity and interest.

These books are perfect for middle schoolers, or for older kids who want an easy, fun read!

#1: The Girl Who Drank The Moon is this year’s Newbery Award Winner. This is so beautifully written, I found myself re-reading the lines aloud. Then I would call my mom and recite them to her. *heart* This doesn’t have a defined “magic system”, giving it a more folklore feel. It does have a tiny bit of blood, but it’s so mild that I almost included it in my HP list for younger readers.

#2: Goose Girl is similar to Shannon Hale’s Princess Academy books in that there’s a loose magic system. And like the Princess Academy, it’s also appropriate for tweens. In this novel, Anidori-Kiladra Talianna Isilee, Crown Princess of Kildenree, is able to develop a talent of “animal speech”. Rich characters capture the reader’s imagination in this coming of age tale.

#3: Eragon is a young adult fantasy series staple. With 35 million copies sold, definitely give this series a try!

#4: Bartimaeus Trilogy is another New York Times bestselling series. Like Harry Potter, this story is set in alternative England and magic rules the day (and the night). And similar to Harry, the main character, Nathaniel, is also a magician-in-training.

Everyone has different opinions on what constitutes “medium” levels of violence. In this article, medium-level of violence includes actions/situations like kicks, punches, broken bones, blood, and intense threats, while more brutal violence is “off screen”. I did my best to track this as I was reading, but you know, I’m human!

#1: Steelheart (Reckoners series) is a story where anyone can become a superhero. And as a superhero story, it blurs the line between sci-fi and fantasy. While most current YA fantasy stories feature a female protagonist, Stealheart goes against the norm with a male protag. The story includes a light thread of romance, but focuses on the action-adventure. And true to Brandon Sanderson style, it features a defined magic system.

#2 Ever The Hunted is a political high fantasy centered on two kingdoms on the brink of war. With medium levels of violence, plenty of PG-rated romantic tension, and a dash of magic, this is a must-read for teens who like romance. This is a new series and a new book is slated to publish each December. So grab one now and pre-order book 2 for Christmas!

#3: Cursed by the Gods (The Sphinx series) is perfect for grown-up Greek-magic loving fans of Percy Jackson. The last book in the 4-book series just published, making it ideal for summer binge-reading! Cursed includes PG levels of romance and medium levels of violence. The author, Wagner, practices fighting styles, and the violence has realistic physical repercussions for the characters. Yeah! This story has a strong romance thread through the story. But, the main character, Hope, has goals beyond getting a boyfriend, which I like!

While the later HP books were dark, I’m erring on the side of prudence: be advised these novels are intended for mature teens. All three of these books have forms of explicit material in the form of combat, gore, or dark story elements. If violence is a concern, or your child has certain triggers, be sure to check out the reviews on Amazon for more details.

#1: Shadow and Bone series is a page turner! Tension is high throughout the entire story, and the innovative, Russian-inspired world fashions for a compelling read. Prepare for your teen to disappear for days as they rip through this New York Times bestselling series. Comparing to the stories above, this novel raises the stakes for violence and romance.

Note! You can pick up a paperback copy of Shadow and Bone right now for less than $2!

#2: Scorpio Races, recipient of the Michael L. Printz Honor award, is inspired by Celtic water horse legends. This stand-alone novel switches between two point of view characters throughout the story. The PG-rated romance takes a back seat to the races. While the romance is relatively tame, this novel has high levels of violence, and the threat of death is real.

#3: An Ember in the Ashes is a world based on Roman culture with Islamic mythological creatures (like the jinn and ifrits). Enormous popularity enticed the author to expand the series, with books 3 & 4 on the way. Paramount purchased this book in a seven figure deal! The violent trials are the focus of the novel, but there is also a romantic thread. The volume contains especially brutal combat scenes, and a heavy focus on the dark slavery system. I’m including this novel because it’s a page-turner with redeemable characters, and ends with a sense of hope.

These books are technically for older readers, due to complex plot and number of characters. However, these books keep a medium-level of violence and PG romance, making them a great option for high-level reading teens.

# 1 Mistborn is technically a “new adult” series due to the complexity of the story and [brilliant] magic system. This is a must read for every fantasy fan, and for high-level teens who are less interested in a heavy romance or a brutally bloody book. This is one of my personal favorites!

#2 The Queen’s Poisoner (Kingfountain Series) is technically an adult series, based on the complexity of the story and the number of characters. Despite the adult-reader target market, it’s PG-rated all around. I binge-read the first three books in this series in a matter of days. My children ate cereal for dinner and I read all day when they were at school {sorry, clients — this series was just that good!}. I’ll admit, I cried a little in this series {Okay, I cried a massive amount, and I may have upset-tweeted the author a couple of times…}. There’s a jump in generations between book three and four, which just published. The remaining novels, 4 & 5, in this series will be published by the end of 2017.

Note: The Maid’s War is a pre-quel, stand-alone book for this series.

Amazingly, JK Rowling may have inspired an entire new generation of novelists. So let this article be a springboard for your teenager; explore other fantasy worlds. Authors today work hard to “hook” readers within the first couple of chapters. If you’re child isn’t totally loving the story after a few chapters, don’t hesitate to encourage them to quit and find another one. This may sound a little counter-intuitive, but don’t let them get discouraged by slogging through books they dislike. If they enjoyed Harry Potter, there’s another fantasy story out there just waiting for them.

Do you have other fantasy books like Harry Potter you recommend for teens? We’d love to hear them!

Disclosure: This post contains affiliate links. This means, we may receive a small commission if you choose to purchase something from a link we post. Don’t worry, it won’t cost you anything. This small percentage just helps us keep the power on and the Diet Coke stocked. We appreciate your support!

Looking for books like Harry Potter for kids in elementary school? This article includes a wide range of books for your fantasy-loving book worm.

Sci-fi for teens! This genre is super popular with kids. So, check out this list of must-read science fiction books by decade! {here} 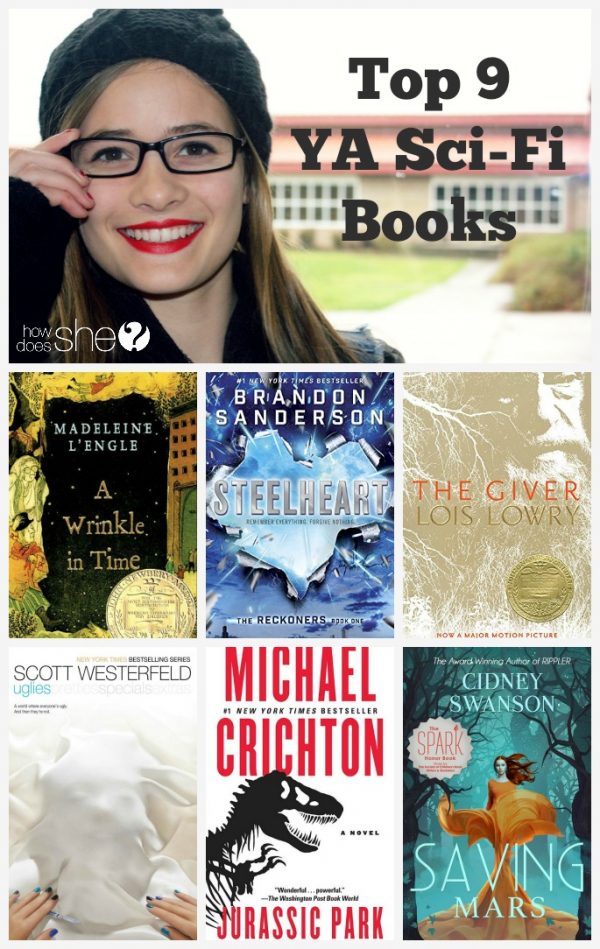 Previous Post: « 5 Things You Should Know How to Do
Next Post: Camping in the air – take your camping experience to a new level! »