оформить займ срочно деньги
Disclosure: This post may contain affiliate links. This means, we may receive a small commission if you choose to purchase something from a link we post (including links to amazon.com because we are a participant in the Amazon Services LLC Associates Program.) Don’t worry, it won’t cost you anything.
Share5K
Pin206
Tweet
Email
5K Shares

If the above picture makes you laugh, it does me too.  But it didn’t at the time, in fact, about 30 minutes before that picture was taken, there was a huge battle being waged about what NOT to wear in public.  You can see who won that battle.

Over the years, and with each child, I’ve learned when to stick to my guns, and when to wave the white flag.  Some battles are worth waging, and some are simply not worth the fight.  In fact, here are four battles that might actually prove beneficial to let your children win.

From the time she first spewed pureed beans all over my white blouse, this picky, head-strong cutie and I have had brutal tug-of-wars when it comes to getting her to eat.  So many parent/children fights are fought over food–dating back to when Adam and Eve introduced the first pesky brussels sprout to their scantily clad brood.  But according to the Mayo Clinic, meal time should never become a battle.

Even if your small child only wants chicken nuggets, or would rather play than eat, the Mayo Clinic recommends not stressing about it too much; most kids get adequate nutrition in the course of a week.  Let your picky eater win this battle, otherwise, mealtimes will become associated with stress, anxiety, and frustration.

The day I decided to back down from the food fight, the stress of meal times immediately diffused.  She still loves noodles and pizza, but when I stopped insisting she try everything on her plate, she actually started trying it on her own.  My two cents: just keep trying, and as your picky eater matures, you may win the war.

The Thirty Years’ War has nothing on the clothing war that you’ll probably wage for at least as long if you have multiple children with vibrant and stubborn personalities who want to dress themselves.  I have three of them who are frequently found on the “What Not To Wear” list.  Mismatched socks, snow boots in July, tacky prints mixed with other tacky prints, usually topped off with bold accessories like feather boas or swim goggles.  Yup, I’m that mom.

Before children, I looked critically at toddlers in the supermarket wearing poofy tutus, leopard print pants, and rain coats.  I thought, “What kind of mom lets her kid go out in public like that?”  And now I know–one like myself who has realized the explosions and waterworks just aren’t worth the fight.  Tip-toeing through a field of land mines would be easier.

But letting your kids win the clothing battle is not just about giving in to avoid a fight.  Amy McCready of Positive Parenting Solutions says in this Today Parents article, “Parents have to ask themselves: What is the most important thing…that [my child] looks cute?  Or is it that she develops autonomy and has some say so in the world?”

I’d like to think that by letting my children have some say in what they wear lets them practice their independence and creativity.  Heck, if my daughter can pull off the above look with a huge grin on her face, then she is building self-confidence that will aid her in years to come! 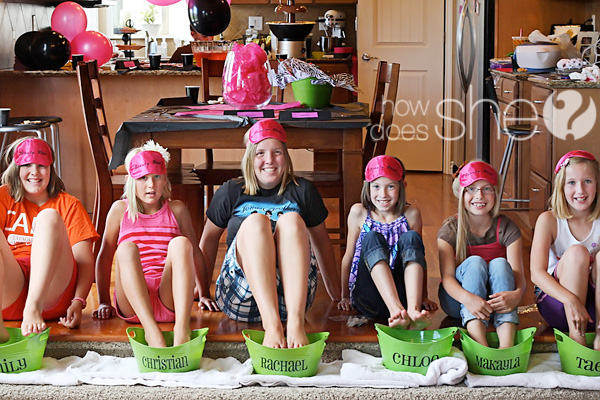 Battling over friends, or forcing your child to like or play with someone you choose will only alienate them.  If your child has a friend you don’t particularly like, authors Jane Nelson and Lynn Lott of Positive Discipline recommend inviting that person into your home often so that a positive influence can be felt.  You can also talk to your kids about the qualities of a good friend and then have faith in them to choose wisely.

4. The Attack of the Killer Mentors

When my daughter wanted to take dance class over soccer, I brushed her off, pretended I didn’t hear her.  My husband and I were both athletes, and naturally, our genetics would trickle down to our little protégés.  To me, dancing was frivolous and so…girly.  And thus we signed her up for soccer.  Besides, she was only five; how did she know what she wanted be good at?

But after weeks of tears and heavy cajoling before every soccer game, I realized maybe I should wave the white flag and let her explore other options that she was interested in.  Maybe I should let her take…gulp…dance.

As parents, we want our kids to be like us.  We want them to love the things we love so we can share something in common.  Essentially, we want to live our lives over again, through fresh new eyes and younger bodies.  But sometimes we push our mentorship too hard to the point where they break.

Letting kids win the battle of which activities they choose to participate in allows them to explore their individuality and find their own passions, not just ours.

Each of my four children are so different, and the struggles I have with one are non-issues with another.  When figuring out which battles are worth the fight, I have to continually ask myself, “Is this hurting anyone?”  Is it hurting anyone when my son wants to wear his swim goggles to Target?  Absolutely not.

So now when I see little boys wearing superhero capes, or little girls in Cinderella costumes, I think, “Rock on mama, rock on!”

Previous Post: « 15 Fun Things to Do Alone. When You Do Have a Chance – Make it Count.
Next Post: 4 Yummy Cheesecakes Your Kids Can Make »