микрозайм онлайнкредит наличными онлайн на карту без посещения банка
Disclosure: This post may contain affiliate links. This means, we may receive a small commission if you choose to purchase something from a link we post (including links to amazon.com because we are a participant in the Amazon Services LLC Associates Program.) Don’t worry, it won’t cost you anything.
Share151
Pin19
Tweet
Email
170 Shares

Have you ever heard of the 2001 South Fremont girls varsity basketball team? I didn’t think so. It’s no surprise really, they being the losing-est basketball team in the history of basketball teams. And you guessed it—I was lucky enough to be on that team.

With a smashing record of 0-21, we didn’t necessarily fill the stands. I think most of the people who showed up just wanted to see if we’d actually win a game. They wanted to be able to tell their children, “I was there for the only game the South Fremont 2001 girls varsity basketball team ever won.”

Regardless of that pathetic record, two cute elderly people were always in the stands, in the same spot, every single game. They were my grandma and grandpa.

Sometimes It’s Just Being There

My grandparents are permanent fixtures in my memory. They were there for every performance, recital, birthday, and sporting event I’ve ever participated in. Now that I think about it, it certainly would have been easier for them to stay in their Lazy Boy chairs at home. So why did they come? Why did they make it a point to be in the first row of every choir concert or on the hard bleachers of every soft ball game?

I think it was because they understood that sometimes, it’s just being there that matters.

Today I am a parent of four lovely and busy children who each have their hand in something. There is always a dance recital, gymnastics class, piano recital, classroom party, or school music program on the calendar.

So many times I look at my fire-breathing to-do list and think, Will they even know I’m there? It won’t hurt if I skip out just this one time…

I promise you, they notice when you’re not there. Each time a kid does something important, they are taking a mental roll call of who’s there. Mom? Here. Dad? Here. Grandma and Grandpa? Check.

Even though to us the activity they are doing might seem banal—to them it is the most important thing in their world at the moment. They want you to be there—need you to be there. In a study found in Child Development titled Parents Do Matter, researchers found that strong parent support leads to higher grades, higher academic performance, facilitates feelings of psychological well-being, and gives kids confidence.

When kids know we’re in their corner, they will soar. 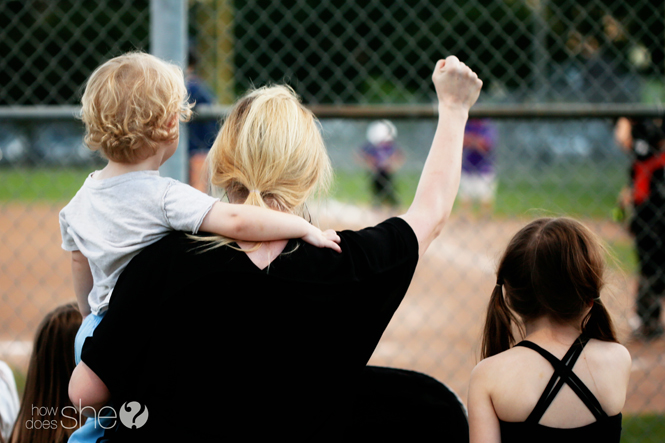 Last spring my son brought home an invitation to his Kindergarten graduation. The date came and of course, 10 minutes before the performance, the baby pooped and needed not only a diaper change, but an entire wardrobe change as well. My toddler couldn’t find her shoes and then commenced a graphic emotional break-down when I suggested she wear the black ones. I had the fleeting thought to just skip the graduation and show up for the applause at the end.

Does it even matter if I’m there? Will he even notice?

Needless to say, we were about five minutes late and forced to sit in the very back row with lower visibility than a foggy day.

But before he could see me, I noticed my son nervously scanning the room. The look on his face was so sad. He was searching for me, for any familiar face really. In that moment, my heart melted for him. It did matter. I stood up like a crazy woman, waving until I caught his attention. When a smile immediately spread across his face, I knew I’d made the right decision, even though getting there was hard.

Parents, you are seen. Grandparents, your gentle presence makes a bigger impact than you know.

Whenever Possible, Be There

If you can, be there for every birthday and baptism. Move heaven and Earth to make it to that soccer game. Reschedule an important meeting or take off work early in order to see your daughter sashay across the stage on her perfectly pointed ballet feet. When you’re not there, your absence is noted. That empty seat says, “She didn’t care enough about me to show up” or “I’m not as important as other things he’s got going on.”

To return to the story of my grandparents. They were sitting in their usual spot at another one of my losing basketball games. I know they were in their usual spot because I glanced up often to catch their encouraging smiles and cheers. But later in the game, there was a commotion in the stands coming from their direction. A crowd was gathered around a figure—my grandpa. He was having a seizure right there on the bleachers.

The ambulance came and took him to the hospital. Soon after, doctors discovered not just one brain tumor, but many. After multiple surgeries and attempts to remove an army that was quickly invading his brain, my grandpa was never the same. He passed away a few years later.

I miss him so much. His empty seat is noted when each one of my babies is born and blessed. His absence is felt at every family dinner and birthday party. But how many people are lucky enough to say they had a grandpa who was there for every game of a losing season? I will never have to question whether or not I was loved. He didn’t get to tell me he loved me one last time, but he showed me so many times before that.

{My mom and grandma who are there whenever they can be.}

Whether you are a parent or grandparent, aunt or uncle, friend or family—be there. If you love them, show them. Be present whenever you can because whether you realize it or not, sometimes it’s just being there that matters.

Building strong family relationships really does come down to those simple things, doesn’t it? You might just love these other inspirational ideas as well:

6 Old School Parenting Methods We Should Bring Back

Understanding Your 4 Different Types of Children

7 Ways To Be Like, the Most Embarrassing Parent Ever

Although Alison, Missy & Shelley started HowDoesShe in 2009, the real backbone of HowDoesShe is its many talented female writers and contributors from all over the United States and Canada, sharing both personal and professional articles and tutorials on how to be amazing women. Read more...
170 Shares
Share151
Pin19
Tweet
Email