Disclosure: This post may contain affiliate links. This means, we may receive a small commission if you choose to purchase something from a link we post (including links to amazon.com because we are a participant in the Amazon Services LLC Associates Program.) Don’t worry, it won’t cost you anything.
Share264
Pin1K
Tweet
Email
1K Shares 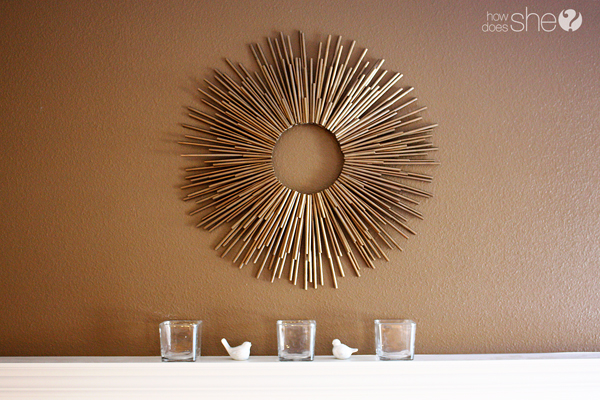 Sunburst frames and mirrors are popping up all over home decor lately. It gives a bit of a mid century, classic feel with a touch of modern thrown in. Recently, I saw one made from thin metal pipes, but it was heavy and rather pricey. After some study and consideration, I decided I could make my own using the humble drinking straw, and this is how I did it!

A cardboard ring- I made mine from tracing a few bowls and cutting it out. It’s far from perfect, but it doesn’t have to be. You could also get a pre-cut ring at a craft store.

A hot glue gun- I used a lot of glue.

Drinking straws- I used about 200 straws for my project, but it depends on the size of your ring. I used flexible straws, but I think if I did it again (I mean when I do it again) I will use straight straws.

Spray paint- I used an entire can and almost wished I’d had another.

Plug in that glue gun and get your supplies ready. You’ll notice that the straws are different lengths in the final project, don’t worry about that until later. For now, start gluing the straws in a circle around the ring.

Glue them in a circular pattern with little space in between. You’ve got to be careful that you stay circular- that means straight out- so you don’t start to get wonky and crooked.

After you’ve got one layer glued, do another to fill in the gaps. It’s important that you try to keep the hot glue hidden and not goop it all over the place, this will help with the final layer and overall look of the piece.

Cut some straws in halves or thirds and keep gluing until you get to a look you want and where everything is covered. For the last layer I cut my straws short, and then glued them in places that would finish the look I was going for. After that, I trimmed the other straws at random lengths so they were not all the same.

Once all your straws are secure and in place, it’s time to spray paint. I set my project on two paper cups so it was off the ground, and I sprayed it over my grass since I used a lot of paint. Be sure to paint the ends of the straws, and really get it all over and around the sides. I sprayed the front and then after it dried I sprayed the back and then the front again. I used an entire can of spray paint and I probably could have used another quarter of a can for good measure.

Done! I liked the metallic brassy paint because it looks like metal tubing, but any color would be nice. I liked this on my wall, but it also looks great hung on a door.

This was such an easy project, as well as inexpensive, which is my favorite combo.

Previous Post: « Eureka! ~Recycle your Burnt out Light Bulbs into Darling Vases~
Next Post: Sick of the Drama? Here is the Perfect Remedy! »